"Paul’s epistle to the Romans is still transforming people’s lives, just the way it transformed Martin Luther and John Wesley. The one Scripture above all others that brought Luther out of mere religion into the joy of salvation by grace, through faith, was Romans 1:17: “The just shall live by faith.” The Protestant Reformation and the Wesleyan Revival were both the fruit of this wonderful letter written by Paul from Corinth about the year AD 56."  Warren W. Wiersbe - Be Right with God, yourself and others, Page 17

What is the theme of Romans?

"People everywhere can enjoy peace and fellowship with God through faith in Jesus Christ, and who gives them the desire and the strength to gladly obey the Lord." From NKJV Charles F. Stanley Life Principles Bible

"The overarching theme of Romans is the righteousness that comes from God: the glorious truth that God justifies the guilty, condemned sinners by grace alone through faith in Christ alone." From NKJV MacArthur Study Bible, 2nd Edition

Who wrote this book?

"The apostle Paul, who wrote about grace from both experience (Acts 9:1-19) and his training and education (Acts 22:3)." From the NIV Quest Study Bible Notes

Some background on the Apostle Paul

"No one disputes that the apostle Paul wrote Romans. Like his namesake, Israel’s first king (Saul was Paul’s Hebrew name; Paul his Greek name), Paul was from the tribe of Benjamin (Phil. 3:5). He was also a Roman citizen (Acts 16:37; 22:25). Paul was born about the time of Christ’s birth in Tarsus (Acts 9:11), an important city (Acts 21:39) in the Roman province of Cilicia, located in Asia Minor (modern Turkey). He spent much of his early life in Jerusalem as a student of the celebrated rabbi Gamaliel (Acts 22:3). Like his father before him, Paul was a Pharisee (Acts 23:6), a member of the strictest Jewish sect (cf. Phil. 3:5).

More than any other individual, Paul was responsible for the spread of Christianity throughout the Roman Empire. He made 3 missionary journeys through much of the Mediterranean world, tirelessly preaching the gospel he had once sought to destroy (Acts 26:9). After he returned to Jerusalem bearing an offering for the needy in the church there, he was falsely accused by some Jews (Acts 21:27–29), savagely beaten by an angry mob (Acts 21:30, 31), and arrested by the Romans. Though two Roman governors, Felix and Festus, as well as Herod Agrippa, did not find him guilty of any crime, pressure from the Jewish leaders kept Paul in Roman custody. After two years, the apostle exercised his right as a Roman citizen and appealed his case to Caesar. After a harrowing trip (Acts 27, 28), including a violent, two-week storm at sea that culminated in a shipwreck, Paul reached Rome. Eventually released for a brief period of ministry, he was arrested again and suffered martyrdom at Rome in ca. A.D. 65–67 (cf. 2 Tim. 4:6)."

Why was it written?

How is Paul's letter to the Romans structured?

The first section (chapters 1-8) expresses what has been called “the gospel according to Paul,” meaning that the only way to fellowship with God is by grace through faith in the risen Jesus Christ.

The second section (chapters 9-11) expounds Paul’s expectation that the Jews, who have largely refused this teaching, will one day accept it.

The final section (chapter 12-16) describes how people saved by grace through faith in Christ should live and behave.

What are some of the life principles explained in Romans?

What do those words means?

The Righteousness of God

People are made right with God (“justified”) by faith alone apart from human effort, a salvation available to all regardless of ethnic identity.  From the Essential Bible Companion

God sees me “Just as if I had never sinned”

From Warren W.Wiersbe – Be Right with God, yourself and others ...

Paul’s theme in the second section of his letter was salvation–righteousness declared. He proved that all people are sinners; so his next goal was to explain how sinners can be saved. The theological term for this salvation is justification by faith. Justification is the act of God whereby He declares the believing sinner righteous in Christ on the basis of the finished work of Christ on the cross. Each part of this definition is important, so we must consider it carefully.

Do not confuse justification and sanctification. Sanctification is the process whereby God makes the believer more and more like Christ. Sanctification may change from day to day. Justification never changes. When the sinner trusts Christ, God declares him righteous, and that declaration will never be repealed. God looks on us and deals with us as though we had never sinned at all!

The image below is from Harvest Bible Chapel … Here I Stand: on Salvation (Soteriology) 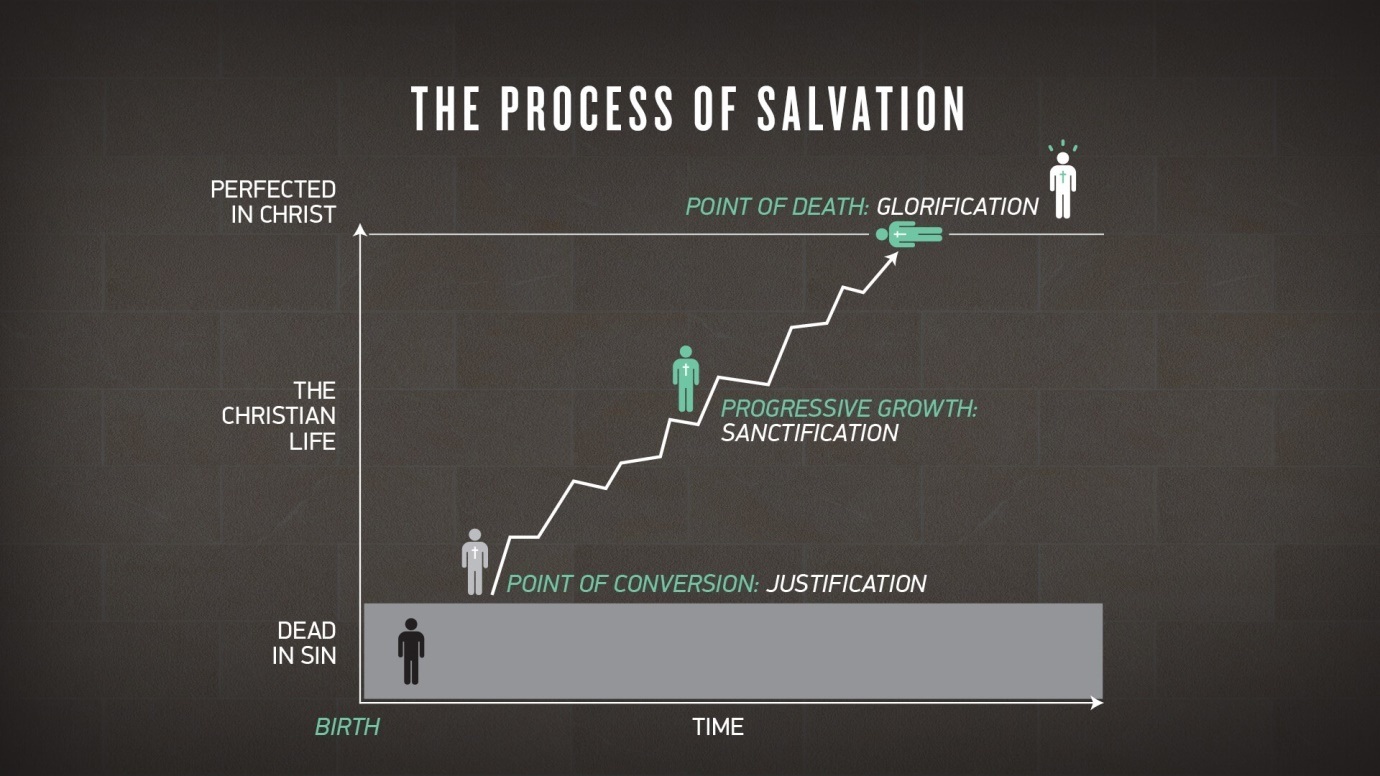