Romans 7:6 AMPC -  But now we are discharged from the Law and have terminated all intercourse with it, having died to what once restrained and held us captive. So now we serve not under [obedience to] the old code of written regulations, but [under obedience to the promptings] of the Spirit in newness [of life]. 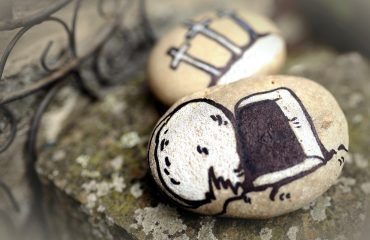 Be Right with God, yourself and others by Warren W. Wiersbe

In my pastoral experience, I have counseled many people who have suffered severe emotional and spiritual damage because they have tried to live holy lives on the basis of a high standard. I have seen the consequences of these attempts: Either the person becomes a pretender, or he suffers a complete collapse and abandons his desires for godly living. I have seen too that many legalists are extremely hard on other people–critical, unloving, unforgiving. Paul wanted to spare his readers this difficult and dangerous experience. In Romans 7, he discussed three topics, which, if understood and applied, will deliver us from legalism.
From Be Right with God, yourself and others by Warren W. Wiersbe

Romans 7:1-3 NLT - Now, dear brothers and sisters - you who are familiar with the law - don't you know that the law applies only while a person is living? For example, when a woman marries, the law binds her to her husband as long as he is alive. But if he dies, the laws of marriage no longer apply to her. So while her husband is alive, she would be committing adultery if she married another man. But if her husband dies, she is free from that law and does not commit adultery when she remarries.

Romans 7:3 - The law that governs a married woman’s actions no longer has any jurisdiction over her once her husband dies. Widows are free to marry again, and Paul even encourages younger ones to remarry as long as their potential mate is a believer (1 Cor. 7:39; 1 Tim. 5:14). Even the legitimately divorced can marry again (see notes on 1 Cor. 7:8, 9).

Romans 7:2 AMPC - For [instance] a married woman is bound by law to her husband as long as he lives; but if her husband dies, she is loosed and discharged from the law concerning her husband.

Romans 7:4-6 NKJV - Therefore, my brethren, you also have become dead to the law through the body of Christ, that you may be married to another - to Him who was raised from the dead, that we should bear fruit to God. For when we were in the flesh, the sinful passions which were aroused by the law were at work in our members to bear fruit to death. But now we have been delivered from the law, having dies to what we were held by, so that we should serve in the newness of the Spirit and not in the oldness of the letter.

Fruit refers to the attitudes and actions that arise from a right relationship with God through Jesus the Messiah (Jn 15:16). Paul elsewhere referred to the fruit of the Spirit as love, joy, peace, forbearance, kindness, goodness, faithfulness, gentleness and self-control (Gal 5:22–23).

Warren W. Wiersbe - Be Right with God, yourself and others

We are delivered from law (v. 6). This is the logical conclusion: The law cannot exercise authority over a dead person. The Authorized Version reads as though the law died, but Paul wrote, “We having died to that wherein we were held.” Death means deliverance (note Rom. 6:9-10). But we were delivered that we might serve. The Christian life is not one of independence and rebellion. We died to the law that we might be “married to Christ.” We were delivered from the law that we might serve Christ. This truth refutes the false accusation that Paul taught lawlessness.

What is different about Christian service as opposed to our old life of sin? To begin with, the Holy Spirit of God energizes us as we seek to obey and serve the Lord. (The word spirit ought to be capitalized in Romans 7:6–“newness of Spirit.”) Under law, no enablement was given. God’s commandments were written on stones and read to the people. But under grace, God’s Word is written in our hearts (2 Cor. 3:1-3). We “walk in newness of life” (Rom. 6:4) and serve “in newness of Spirit.” The believer, then, is no longer under the authority of the law.

From:  Be Right with God, yourself and others by Warren W. Wiersbe

Romans 7:4 AMPC Likewise, my brethren, you have undergone death as to the Law through the [crucified] body of Christ, so that now you may belong to Another, to Him Who was raised from the dead in order that we may bear fruit for God.

We belong to Jesus. We cannot be fruitful unless we attached to Him - the giver of life, the vine.

John 15:4 NLT - Remain in me, and I will remain in you. For a branch cannot produce fruit if it is severed from the vine, and you cannot be fruitful unless you remain in me.

Romans 7:4 The Message When Christ died he took that entire rule-dominated way of life down with him and left it in the tomb, leaving you free to "marry" a resurrection life and bear "offspring" of faith for God.

Questions:
1. What can we leave in the grave?
2. What does a resurrection life look like to you?

Romans 7:5 NLT When we were controlled by our old nature, sinful desires were at work within us, and the law aroused these evil desires that produced a harvest of sinful deeds, resulting in death.

How can we identify when we are being controlled by our old nature (the flesh)?

Romans 7:6 NKJV But now we have been delivered from the law, having died to what we were held by, so that we should serve in the newness of the Spirit and not in the oldness of the letter.

When I read that phrase 'oldness of the letter', I thought about a beautiful song from Hillsong called "Lettered Love" and the new, transforming love of Jesus.

Romans 7:7-12 ESV -  What then shall we say? That the law is sin? By no means! Yet if it had not been for the law, I would not have known sin. For I would not have known what it is to covet if the law had not said, “You shall not covet.” But sin, seizing an opportunity through the commandment, produced in me all kinds of covetousness. For apart from the law, sin lies dead. I was once alive apart from the law, but when the commandment came, sin came alive and I died. The very commandment that promised life proved to be death to me. For sin, seizing an opportunity through the commandment, deceived me and through it killed me. So the law is holy, and the commandment is holy and righteous and good.

Once I was alive. Paul reviews his own experience from the vantage point of his present understanding. Before he realized that the law condemned him to death, he was alive. Reference is to the time either before his bar mitzvah (see below) or before his conversion, when the true rigor of the law became clear to him (cf. Lk 18:20–21; see Php 3:6 and note). when the commandment came. When Paul came to the realization that he stood guilty before the law — a reference either to his bar mitzvah, when he, at age 13, assumed full responsibility for the law, or to the time when he became aware of the full force of the law (at his conversion). I died. Paul came to realize he was condemned to death, because law reveals sin, and sin’s wages is death (see 6:23).

From Case for Christ Study Bible

WERE GOD’S INTENTIONS FOR THE LAW THWARTED? (7:10)

No, for two reasons: (1) God intended for the law to help us see just how bad sin is. It does that by showing us that we can’t live in our own power; when we try, we die. (2) God intended for the law to lead us to life. It does that by leading us ultimately to Jesus Christ, the culmination of the law (10:4 see Gal 3:24). As the fulfillment of the law, Jesus is the only one who can empower us to live according to the Spirit (Ro 8:3–4). See How was the Law fulfilled? (Mt 5:17–18) and Did Jesus abolish the Old Testament law or fulfill it? (Eph 2:15).

Romans 7:8 AMPC - For without the Law sin is dead [the sense of it is inactive and a lifeless thing].

The law helps us to recognise we are sinning.

Romans 3:20 AMPC: For no person will be justified (made righteous, acquitted, and judged acceptable) in His sight by observing the works prescribed by the Law. For [the real function of] the Law is to make men recognize and be conscious of sin [not mere perception, but an acquaintance with sin which works toward repentance, faith, and holy character].

Romans 7:8-12 The Message - What happened, though, was that sin found a way to pervert the command into a temptation, making a piece of "forbidden fruit" out of it. The law code, instead of being used to guide me, was used to seduce me..... The very command that was supposed to guide me into life was cleverly used to trip me up, throwing me headlong.

God is greater than any plan of the enemy....

1 Peter 5:8 NLT - Stay alert! Watch out for your great enemy, the devil. He prowls around like a roaring lion, looking for someone to devour.

Romans 7:11 AMPC - For sin, seizing the opportunity and getting a hold on me [by taking its incentive] from the commandment, beguiled and entrapped and cheated me, and using it [as a weapon], killed me.

Another opportunity was seized by the enemy and resulted in death - The Fall in the garden of Eden.

Genesis 3:1 AMPC - Now the serpent was more subtle and crafty that any living creature of the field which the Lord God had made. And he [Satan] said to the woman, Can it really be that God has said, You shall not eat from every tree of the garden?

Some questions to consider:

1. What did God say to you when studying this passage?

2. What does that mean for how you live your life? (ie is there something you believe God wants you to do differently?)

3. How can we as a Lifegroup support you?